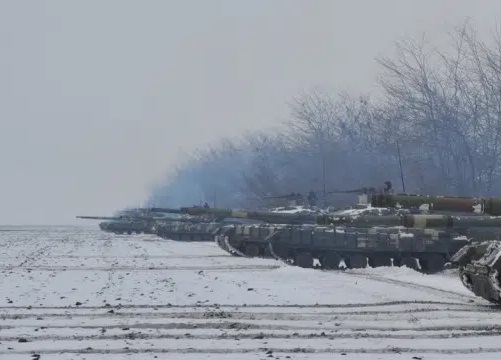 We are following with great concern the dangerous deterioration of the relations between the Russian Federation and the Republic of Ukraine, the outbreak of military operations between the two sides and the incursion of Russian forces into Ukrainian territories.

We had hoped, like other peace-loving forces in the world, that the outbreak of this war would be avoided and the disputed issues be resolved through dialogue, negotiations, and peaceful and diplomatic means.

Wars, aggression against states and violation of their sovereignty are unacceptable in principle to us. They will only bring destruction and human and material losses, disrupt public life and services, paralyze economic life, harm innocent civilians and result in terrorizing women and children in particular.

While we condemn and reject resorting to the option of war, we also condemn acts of provocation, escalation, insistence on expanding NATO eastwards, disregarding Russian security concerns, and seeking to besiege and encircle Russia militarily by the US and NATO members states for quite some time now, and exerting pressure on the Kiev government to respond to the US-NATO plans and projects, which ultimately aim to establish hegemony and control over the world, its states, peoples and resources, and return it to the climate of Cold War and the arms race.

On the other hand, it must be emphasized that the Ukrainian government should respect the rights and freedoms of its citizens, and refrain from any repressive practices on the basis of national discrimination or for any other reason, as well as respecting their choices. It should return to the implementation of the Minsk Agreements to reach a political settlement of the conflict.

In these difficult and complex circumstances, as the world is holding its breath and worried by the possibility of major developments and the outbreak of military operations on a large scale, it must be said that this war poses a serious threat not only to Russia and Ukraine and inflicts great harm on their peoples, but also exposes global peace and security to grave dangers. It also fuels nationalist, extreme right-wing and anti-democratic tendencies in the two countries and throughout Europe, fuels conflicts and wars in the world and provides more pretexts for foreign military interventions.

The peoples of the world, who have not yet recovered from the Covid-19 pandemic and its dire consequences, have been widely shocked by this manner of violating international law and the sovereignty of states, which is what the US and its allies have done many times before, and it is now repeated in these Russian military operations. This is so at a time when the rules of law and the UN Charter must be respected, showing concern for peace and stability in the world and respecting international rules and norms, and the right of peoples to self-determination with their own free will.

We add our voice to those of peace-loving forces that have risen around the world, condemning this war and calling for it to stop immediately, to return to the dialogue table and negotiations under the aegis of the United Nations, and to start a serious dialogue to reach understandings that guarantee the interests of all parties, reassure the civilian population and the right of all peoples to live in safety and peace, away from the scourge and evil of wars.