Iraqi Communist Party : What kind of government do the participants of the Uprising want? 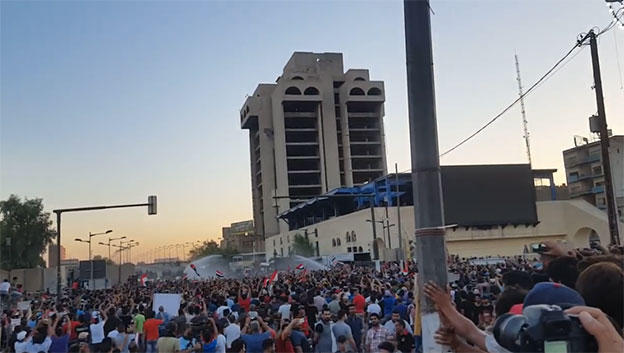 The following is the Editorial of “Tareeq Al-Shaab” (People’s Path), the daily newspaper of the Iraqi Communist Party, published on 31 October 2019:

The glorious October Uprising has not limited its slogans and demands to replacing this or that person, nor did it make the enormous sacrifices so that the same mechanisms enforced since 2003, and which have proved to be a terrible failure at all levels, would remain in place.

The ongoing popular national uprising has created a new reality. The balance of forcesis no longer subject only to the results of the 2018 elections and cannot ignore the newbig realities imposed by the rising masses.

Certainly, the people did not come out to the streets for partial solutions and cosmetic reforms. They have directly raised, in their uprising, the goal of getting rid of the existing system of government, the quota system and rampant corruption, of the group that hasruled since 2003. The uprising has also asserted the necessity of change towards a state based on the principle of citizenship.

The peaceful protesters in the uprising, after shedding a lot of their precious blood, have categorically declared that there is no return to square one, and that those who insist on adhering to the same failed policy are deliberately impeding the achievement of the desired change in policy, performance and persons.

The moment of real change of the status quo has arrived. It begins with changing the government, the mechanisms for its formation and the policy of governance, and ends with establishing a state based on citizenship, true democracy and social justice.

While stressing that any delay in this will not be in the interest of our country, and in order to avoid the worst possibilities and chaos, and to ensure that a peaceful and smooth constitutional handover of power takes into account the new realities created by the Uprising, we affirm the need for:

1- The resignation or dismissal of the existing government in accordance with the constitutional procedures.

2- The formation of a new government composed of competent and effective patriotic figures who are well-known for their integrity. It is a government that should have exceptional powers and be formed away form the abhorrent quota system andcorruption, and in accordance with the Constitution. Its term should not exceed the period necessary to prepare the prerequisites for transition.

3- The President of the Republic, in accordance with the Constitution, should take the necessary steps to select the Prime Minister in accordance with the criteria of patriotism, competence, integrity, independence and the ability of decision-making, away from regional tendencies, political sectarianism and narrow partisanship.

4- The basic tasks of the new government will be:

a) Accomplishing immediate and urgent steps to secure the people's livelihood and ensure their urgent needs, and implementing the economic and social demands of the protesters.
b) Bringing just retribution to those who committed the crimes of killing the demonstrators, as well as those who issued orders to them, releasing the detainees and ‘disappeared’, and halting the campaigns of pursuit and detentions.
c) Activating the cases of corruption, starting with the big ones, bringing the corrupt to justice and recovering the looted money.
d) Preparing for early elections that must be preceded by:
1. Enacting a new democratic and fair electoral law, which enshrines the principle of citizenship, expand representation and persuade citizens about the importance of elections and participation in them.
2. Amending the Political Parties Law to ensure a healthy democratic political life.
3. Setting up a new High Electoral Commission, that is truly independent and includes competent people from outside political parties and blocs, under the supervision of the judiciary.
4. Ensuring effective international supervision.
e) Putting arms under the control of the state and ending the role of the militias and armed elements that are outlaws.
f) Preserving the sovereignty of the Iraqi state, securing the independence of national decision-making and preventing external interference in its affairs.

Finally, let us strive to maintain the momentum of the Uprising until its objectives are fully achieved.