Iraqi Communist Party: No to Violence and Oppression in Basra!

The Central Committee of the Iraqi Communist Party holds its regu...

Statement of the Iraqi Democratic Youth Federation On Internation...

Iraqi Communist Party: We Support the Just and Legitimate Demands...

Iraqi Communist Party: Interview on the success of trans-sectaria...

Iraqi Communist Party Statement on the Crime of Targeting the Hea...

Statement on the recent Parliamentary Elections in Iraq :Iraqi Co...

Iraqi Communist Party: No to War .. Yes to Peaceful Solutions and...

Interview on Recent Developments and Electoral Alliances in Iraq.... 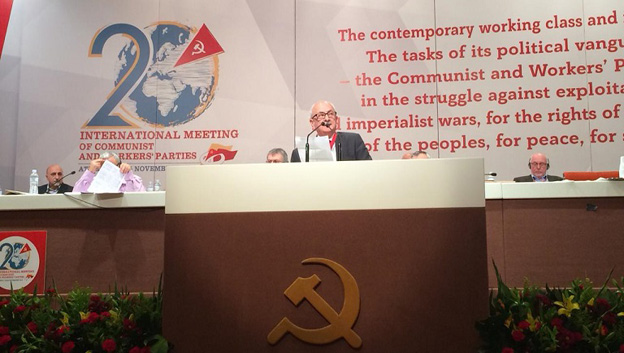 I convey to you the wholehearted greetings of Iraqi Communists, and their best wishes for the success of the 20th International Meeting of Communist and Workers’ Parties, so as to contribute to developing the role of our movement in building          a global front against neo-liberal globalisation and imperialism, for peace, democracy, social progress and socialism.

We express our thanks to the fraternal Communist Party of Greece for hosting this International Meeting. We also seize this opportunity to send our warmest comradely greetings on the special occasion of the 100th anniversary of the founding of the KKE, wishing it further successes along the path of defending the interests of the Greek people and working class, for peace and socialism.

We hope that this International Meeting will provide an opportunity for strengthening the relations between Communist and Workers’ parties, exchanging views and valuable experience of struggle in very diverse conditions in various parts of the world. It is also important to discuss how we can develop these international meetings into a more effective platform for developing initiatives for joint action.

We also seize this opportunity to express, from this international forum, our gratitude to all the fraternal parties that have continued to extend international solidarity to our Iraqi people, democratic forces and Communist Party in the ongoing struggle against sectarian politics and anti-democratic policies, to defeat terrorism, reactionary forces and external interference undermining national unity, and to build an independent and unified democratic and federal Iraq.

Our International Meeting is taking place in a world climate that is still suffering the consequences of the deep crisis of globalized capitalism, economic stagnation, increased unemployment and poverty, the imposition of austerity measures in many countries, and the stirring up of xenophobia and hate against immigrants. Imperialist powers, led by US imperialism under the Trump administration, are attempting to push the world back to the climate of Cold War and arms race, employing economic and political sanctions on a large scale and exporting arms, especially to the regions that are witnessing military conflicts.

This situation has fuelled tensions and is instigating conflicts and wars in many areas around the world, especially the Middle East. It has produced a fertile ground for the growth of extremist right-wing, fascist and ultra-reactionary terrorist movements, gravely threatening world peace.

The external imperialist interference and intense competition among reactionary regional powers in the Middle East to impose their hegemony over the region have contributed to deepening conflicts on a sectarian and ethnic basis and internal fragmentation. The peoples of the region are paying a heavy a price for these policies, as demonstrated by the war in Yemen, instigated by the Saudi regime, that is continuing with catastrophic consequences for innocent people and civilians.

It is important to draw attention here to the continuing efforts by the Trump administration to push ahead with building what is tentatively known as the Middle East Strategic Alliance (MESA), a so-called “Arab NATO”, which is a new security and political alliance in the Middle East with Saudi Arabia and other Gulf states, Egypt and Jordan under the pretext of countering Iran’s expansion in the region.

In this volatile climate, the US has decided to re-impose economic sanctions on Iran unilaterally and without international legal cover. This action follows its decision to withdraw from the Iran nuclear agreement. As the two sides exchange threats, international and regional parties express their concern that the situation could degenerate into a devastating military conflict. This would add new burdens to the peoples of the region who are already suffering the nightmare of the war against terrorism in Syria, the senseless bloody war in Yemen and the instability in several other countries.

The peoples of the region, including the Iranian people, are looking for stable conditions in which they can utilize their resources and wealth for their well-being and to build their own countries. It is the right of these peoples to enjoy freedom, democracy and a decent life, and to choose their own political systems according to their will, without wars, economic sanctions and siege.

Meanwhile, the Israeli occupiers are continuing their crimes against the Palestinian people, with blatant support by the US, including the its recent military aggression on Gaza. We reiterate our full support for the Palestinian people and their right to return and to self-determination; to set up their independent national state on their homeland with its capital in East Jerusalem.

We also call for international solidarity with the struggles of peoples in the Middle East against dictatorial and reactionary regimes, including popular protests and strikes, for freedoms and dignified life. The struggle for peace and against imperialist intervention is closely interconnected with the fight for democracy and human rights. Our party condemns all repressive measures against the patriotic and democratic forces, and against the forces of the Left, progress, socialism and communism.

Our party is continuing its struggle, in difficult and complex conditions, to put an end to the sectarian-ethnic quota system that was installed after the US war, invasion and occupation of Iraq 15 years ago. Since then our country has been facing challenging times. A significant military victory has been achieved against “Daesh” (the so-called “ISIS”), but it does not mean a final defeat of terrorism. Achieving this aim requires an integrated approach and policies on political, military-security, economic and cultural levels. In addition, Iraq is still suffering the consequences of an ongoing deep structural political crisis.

Our party members and supporters have been active participants in the mass protest movement that has continued since 2015 against corruption and sectarian politics. A new wave of protests erupted last July in Basra, in southern Iraq, against rampant corruption, high unemployment especially among young people, poverty and poor services. Despite vicious repression by the security forces and armed groups that led to more than 20 peaceful protesters killed and hundreds wounded, the protests shook the foundations of the sectarian-ethnic quota system. But putting an end to this political system is a big challenge. Our party firmly believes that the legitimate demands of the people for real political reform and change can only be achieved through developing and intensifying popular pressure and mass campaigns, in order to bring about a change in the balance of forces to achieve a democratic alternative in a free unified federal democratic Iraq.

The outcome of the parliamentary elections last May, despite blatant interference by the ruling blocs and their manipulation of the electoral process, demonstrated the people’s strong desire to break the monopoly of political power and open up the path for change. Our party and the electoral coalition and alliance of “Sairoun” [i.e. Marching Towards Reform], consisting of Communists, the Sadrist movement and its supporters, and civil and liberal forces, achieved significant results. It won more than 16% of the seats in the new parliament. This alliance has stressed the importance of the new government adopting a national program that can be implemented according to specific time limits. The aim of this program is to achieve serious reform in the political system, to abandon the sectarian-ethnic quota system and work towards establishing a state based on the principle of citizenship, true democracy and social justice. It is a state of institutions, law and freedoms, that would provide services to the citizens, combating corruption, ensuring the return of millions of internally displaced people to their homes and the reconstruction of cities and towns destroyed in the battle against Daesh. It would ensure the diversification of the sources of the national income and pursuing a path of sustainable development. Arms would be put under the control of the state. It would ensure Iraq’s independence and establishing relations based on equality with the countries of the region and the world.

In this difficult struggle and under the current complex conditions, we look forward to wider support and international solidarity with the Iraqi people and their democratic forces, including our Communist Party, in the fight to defeat terrorism and political sectarianism, achieve national unity, and build a civil democratic state based on social justice.

We thank once again our Greek comrades for hosting this International Meeting and for their efforts to ensure its success. The Iraqi Communist Party reaffirms its determination to continue its efforts to strengthen internationalist ties and relations with fraternal Communist and Workers’ parties, and with all peace loving, progressive and democratic movements in the world, in the joint struggle for freedom, democracy, social progress, and socialism.